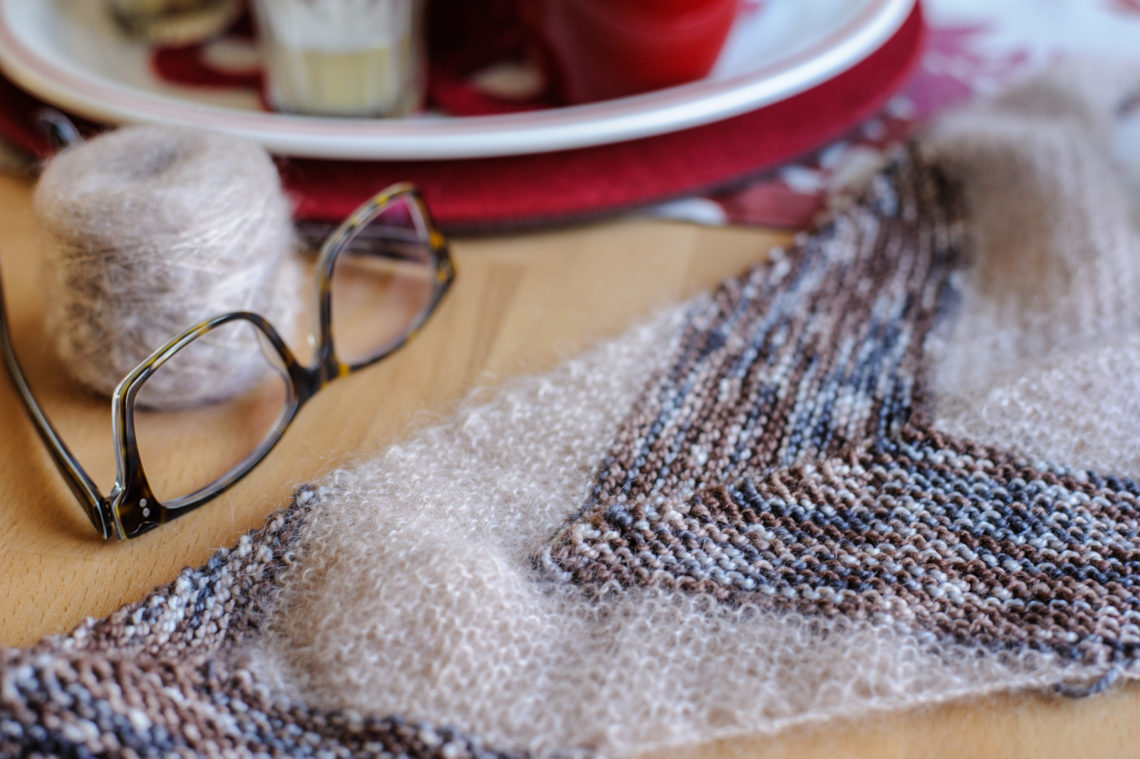 Do you remember the TV show ‘ Friends‘? I have been a huge fan of it. I’ve seen all ten seasons multiple times and I actually have all of them on DVD… Now if you are familiar with it, you probably remember that Ross and Rachel were having an on and off relationship for a long time.

Something similar happened to the relationship between me and my Birds of a Feather shawl…We had a flying start, it got a bit rough then, followed by going along well, and then came the breakup… It does sound more dramatic then it probably is, but let me explain … 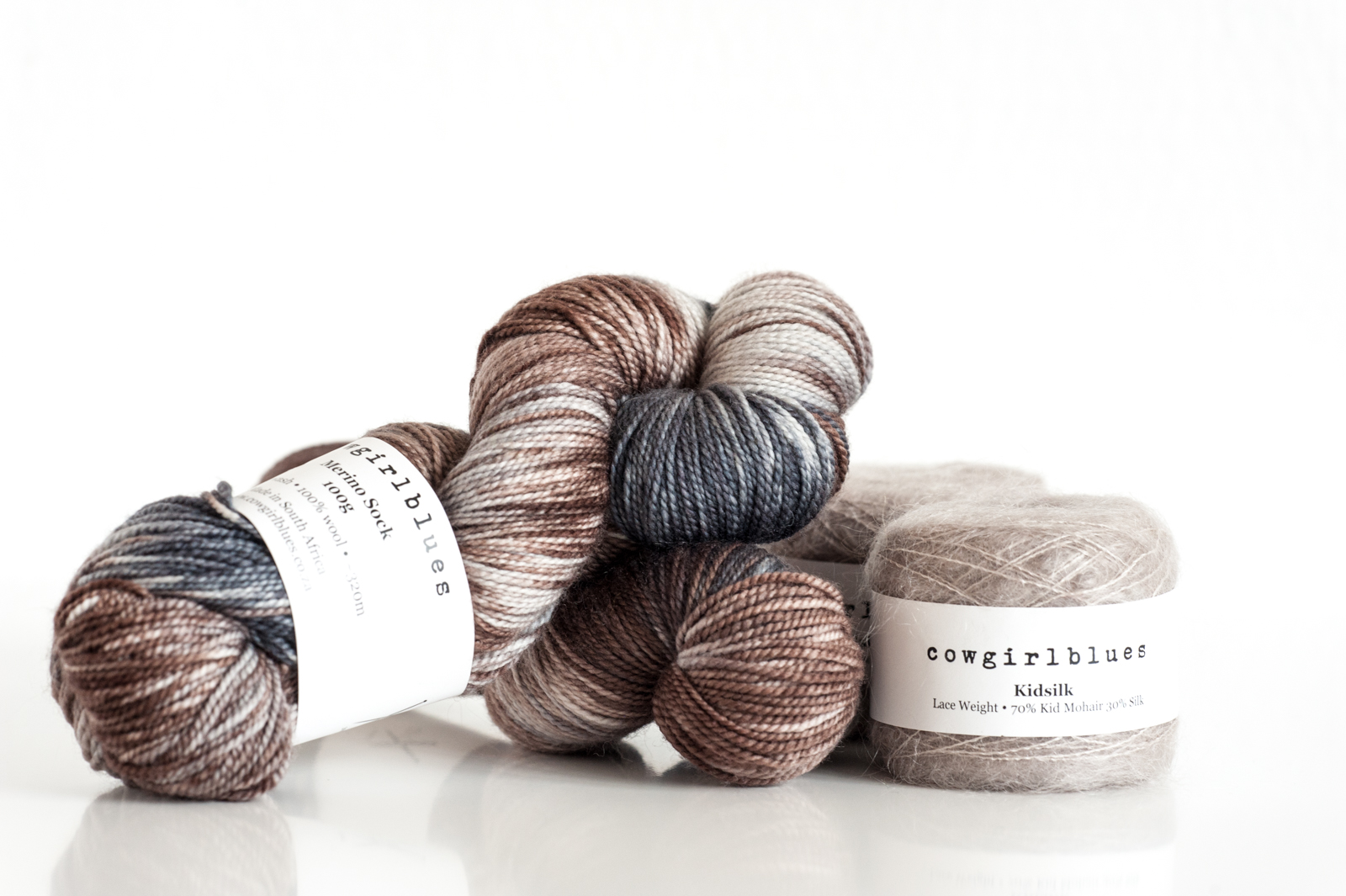 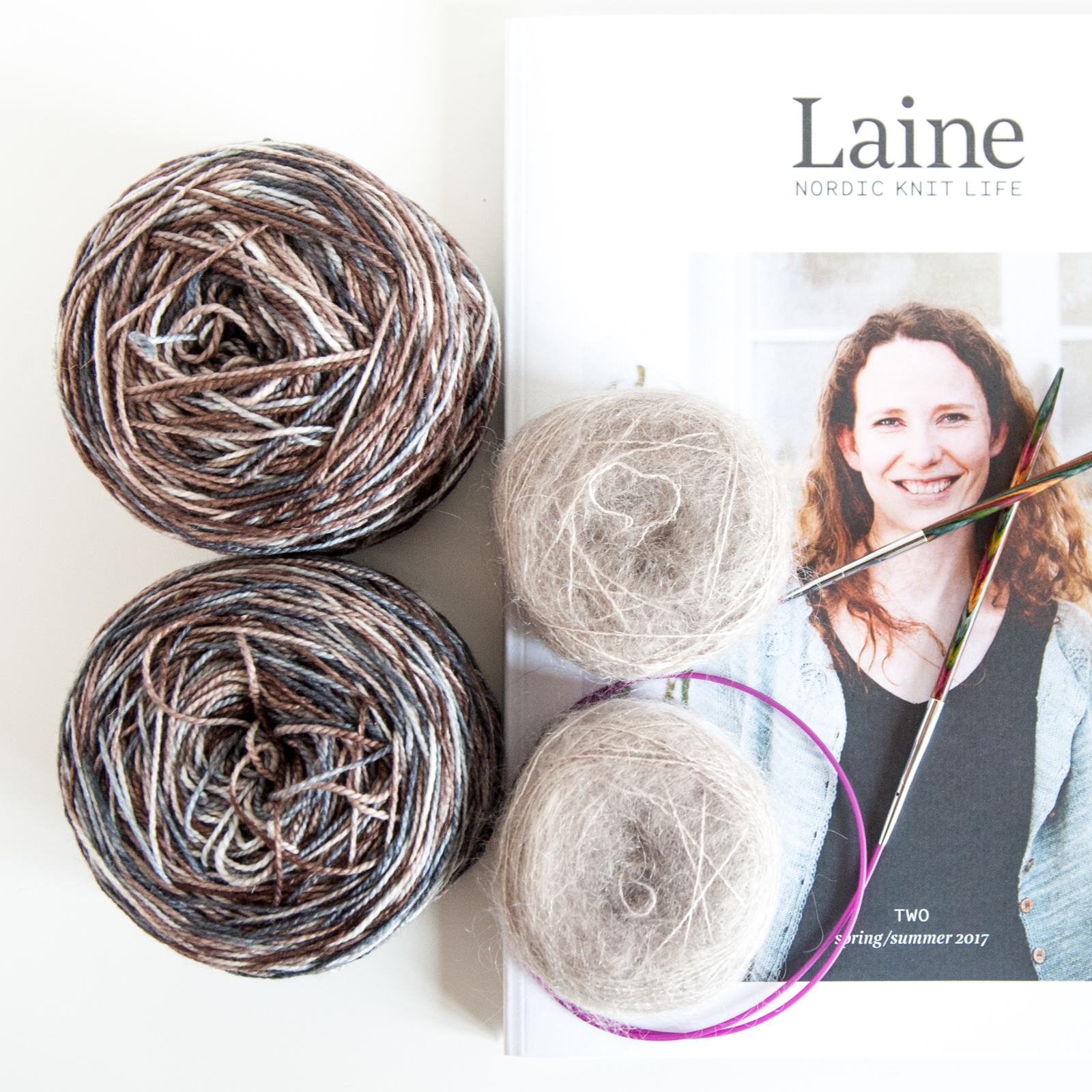 Birds of a Feather is a beautiful shawl pattern by Andrea Mowry (it was featured in Laine Magazine) and I packed it as one of my holiday projects last Autumn. I wrote about my plans for making it earlier in this post. Being a not very experienced knitter yet, I thought that this would be a nice challenge to learn a few new techniques. 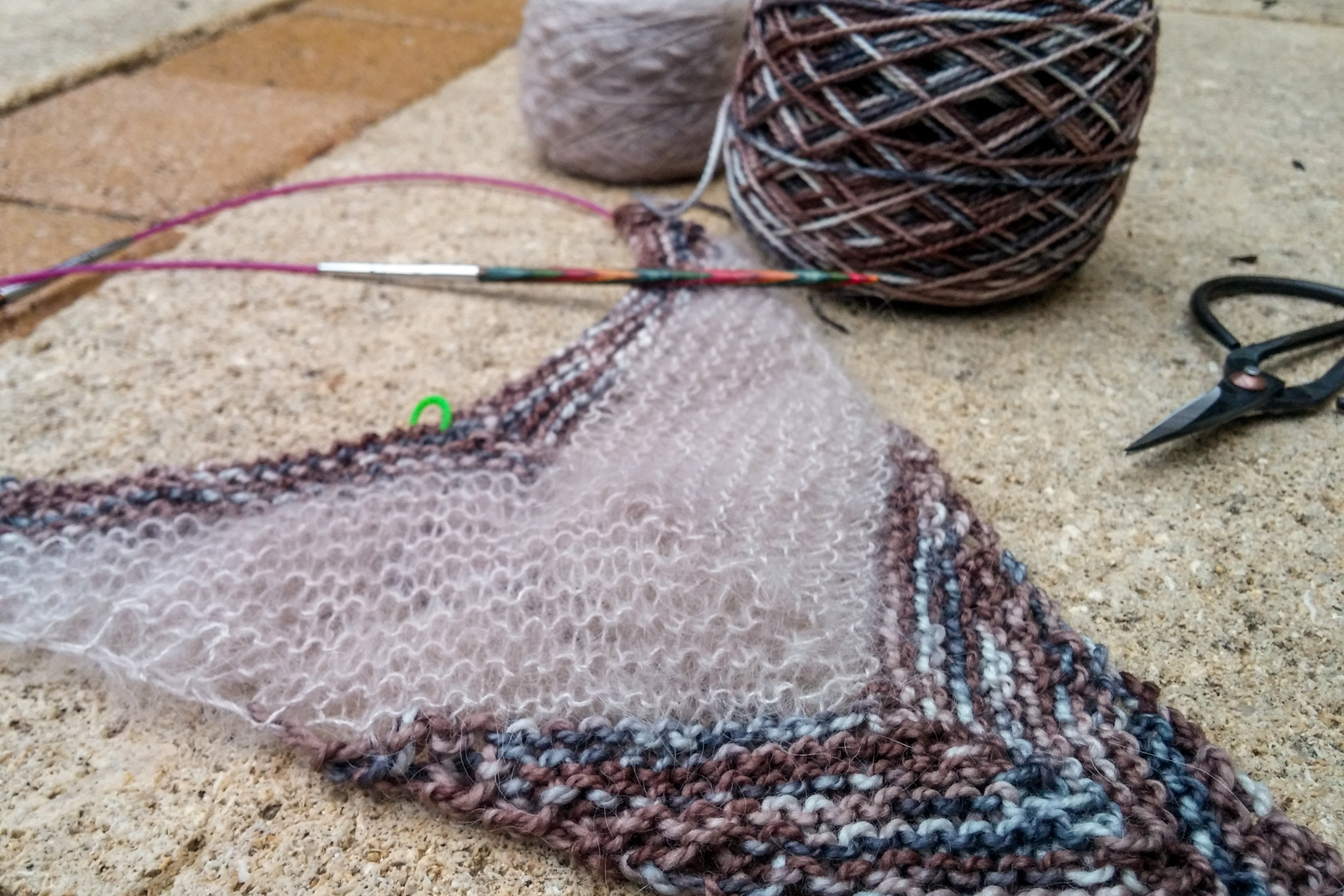 I managed to do the first bit without any problems and I was well underway with the second section when I dropped a stitch. No big deal if it hadn’t been a stitch of the centre spine…  [This is the part where our relationship hits the rough path.] There was no way that I was going to fix that.

There was only one solution for this in my opinion: unravel the entire thing (let’s face it, starting over in this early stage was not that bad). However, I forgot about the section that was knitted using kid silk mohair. There is no way that you can unravel this kind of yarn. I did write about this phase in our relationship earlier as well.

So, assuming that I would have enough yarn I decided to start over completely. There’s one advantage of this situation: I was able to block my first attempt and that definitely motivated me to start over because the blocking made such a big difference. My scrappy first attempt was looking very lovely already! 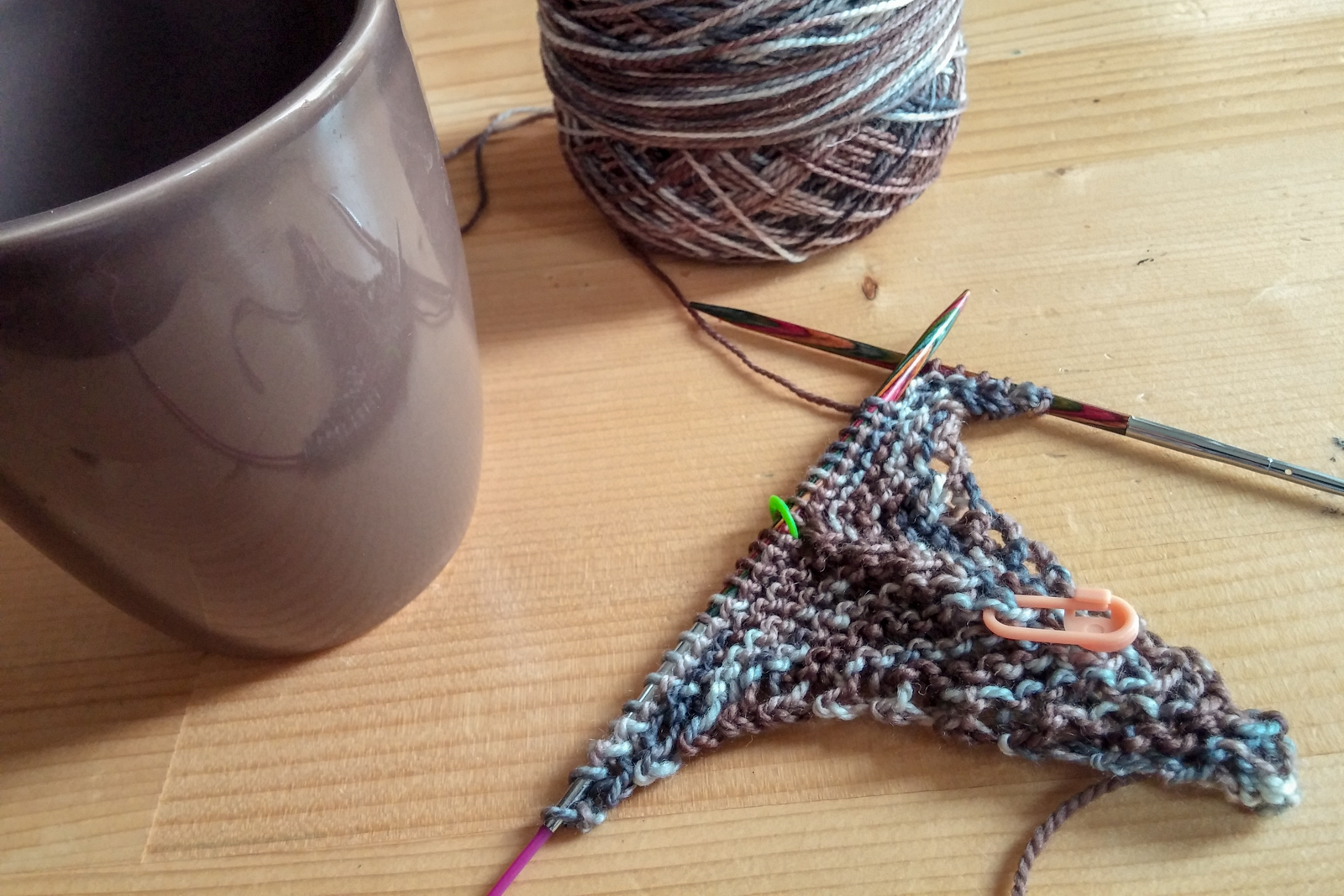 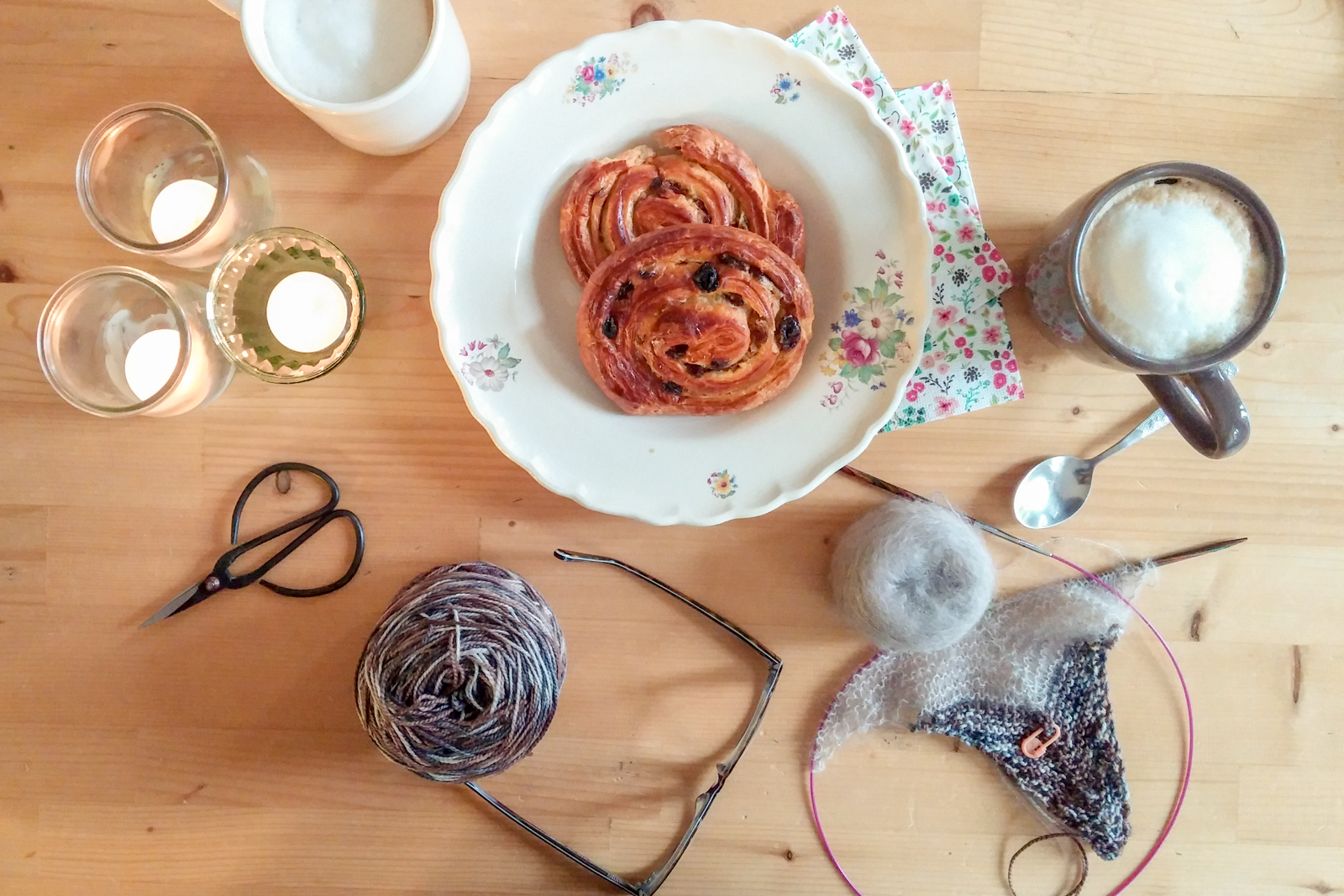 On the second day of rain during our holiday in France,  I started over. Stitch after stitch was flying off of the needles since I had a bit of practice now. [This is the part where we are going along well.] The second and third sections were completed without any problems.

You can imagine that I was full of confidence when I started section four which is the first lace section of the pattern. I had never been knitting lace patterns before. I read the instructions very carefully and it basically is just a combination of decreases and increases. [This is where we get towards the breakup.] 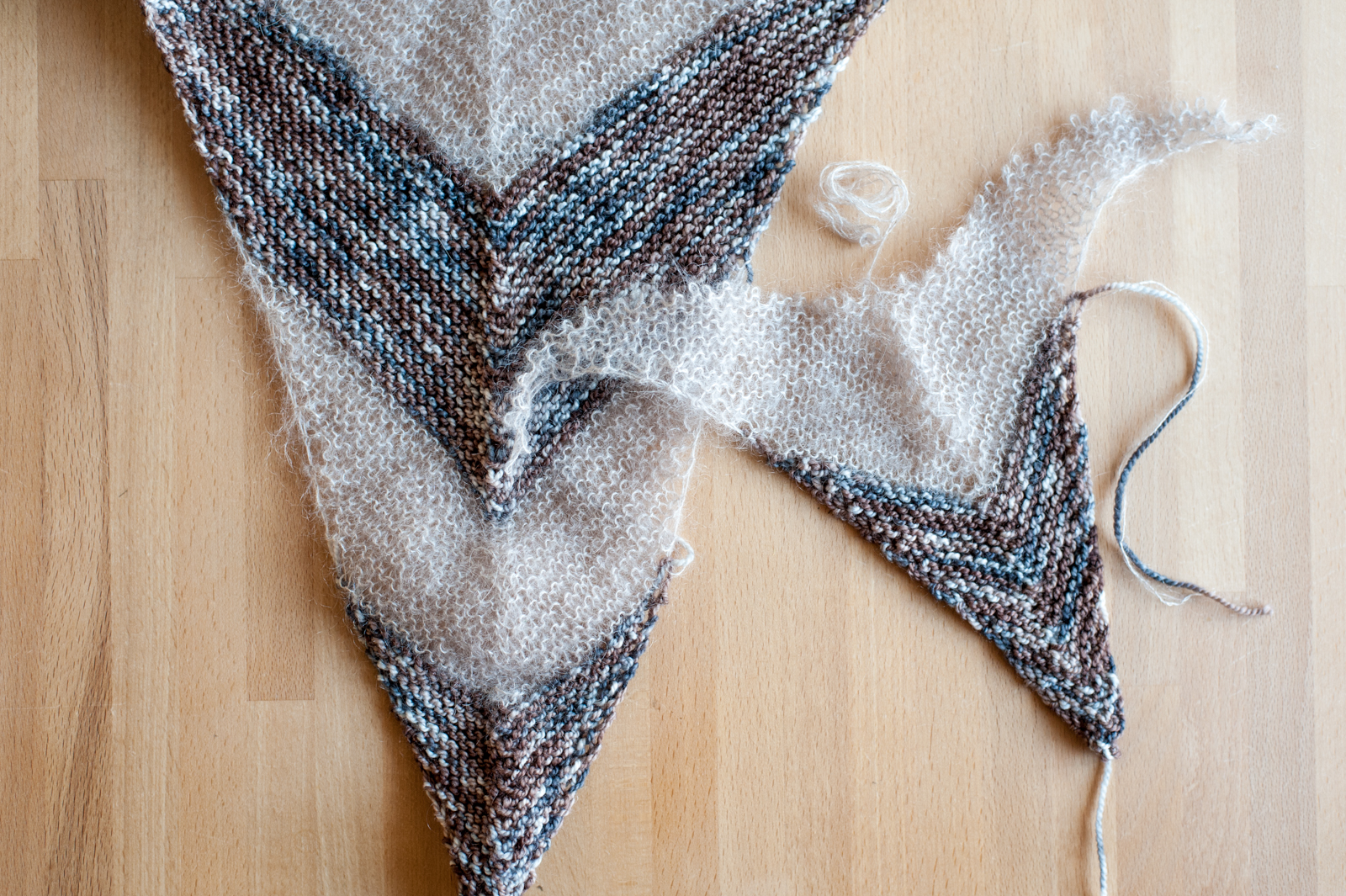 You can guess what happened right? The lace was not as easy peasy as I thought it would be. I assume that made a mistake reading the pattern and because of that I messed up the entire thing. It was just not working. My motivation to continue this shawl was at an all-time low so I decided to put that whole thing into a project bag and ignore it for a while. [We are on a break now.]

There was a short attempt at getting back together when I tried to fix my mistake. I had made a decision: I would try to unravel my mistake. If that was going to work out, then I would continue this project. When the unravelling would not work out then I would give up on the Birds of a Feather shawl… It did work out with the help of a lifeline (and a lot of patience)!

It didn’t mean that we were getting back together because I feared that lace section and I was totally convinced that there was a mistake in the pattern since this could not have been my mistake, of course. After all, I had been reading the pattern very thoroughly. Does that happen to you too? Something gets stuck in your head and that is then the absolute truth? I was convinced that it was not my mistake. So everything disappeared in the project bag again and I moved on with other stuff. I even removed the needles from the cable. We were that much on a break!

It’s the same kind of break that Ross and Rachel were on in ‘Friends’. They were not together and they were seeing other people. [I have been starting and finishing several other knitting and crochet items.] Luckily, my Birds of a Feather shawl doesn’t talk to me, so it can not accuse me of cheating on it by working on other projects. Unlike Ross and Rachel. There is this situation where Rachel feels that Ross is cheating on her and he replies with: “We were on a BREAK!” That’s what made me think of how similar the relationship between me and the shawl is! 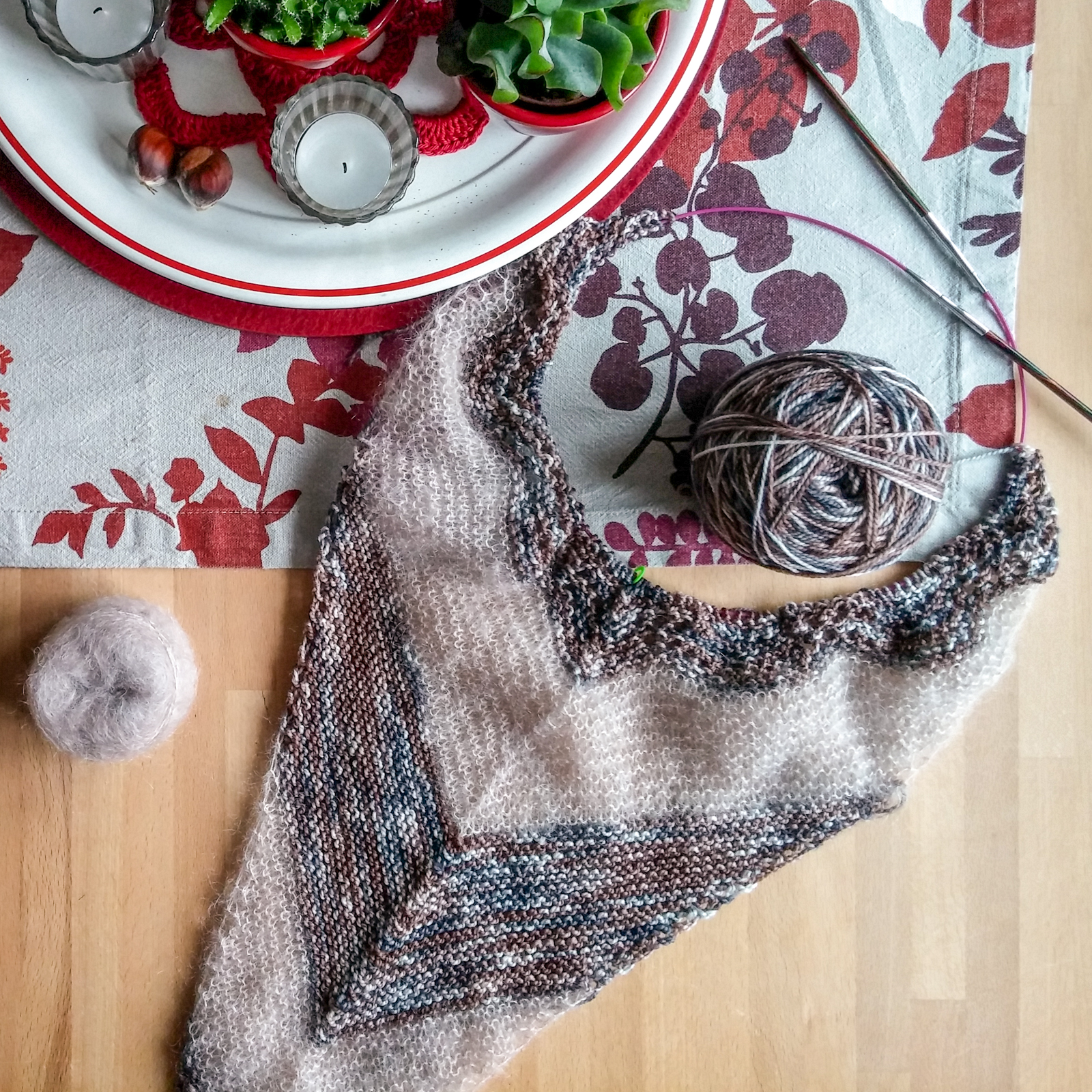 I am not really sure how long it took before the both of them did finally get together again. I and my Birds of a Feather are back together for now. I had another attempt at the lace section after checking the number of stitches three times and putting in a lifeline before starting the difficult part (it would make another unravelling a lot easier). I counted and counted my stitches, read the instructions in the pattern multiple times and put in extra stitch markers to keep track of where the repeats would begin and end. And it seems to be working! 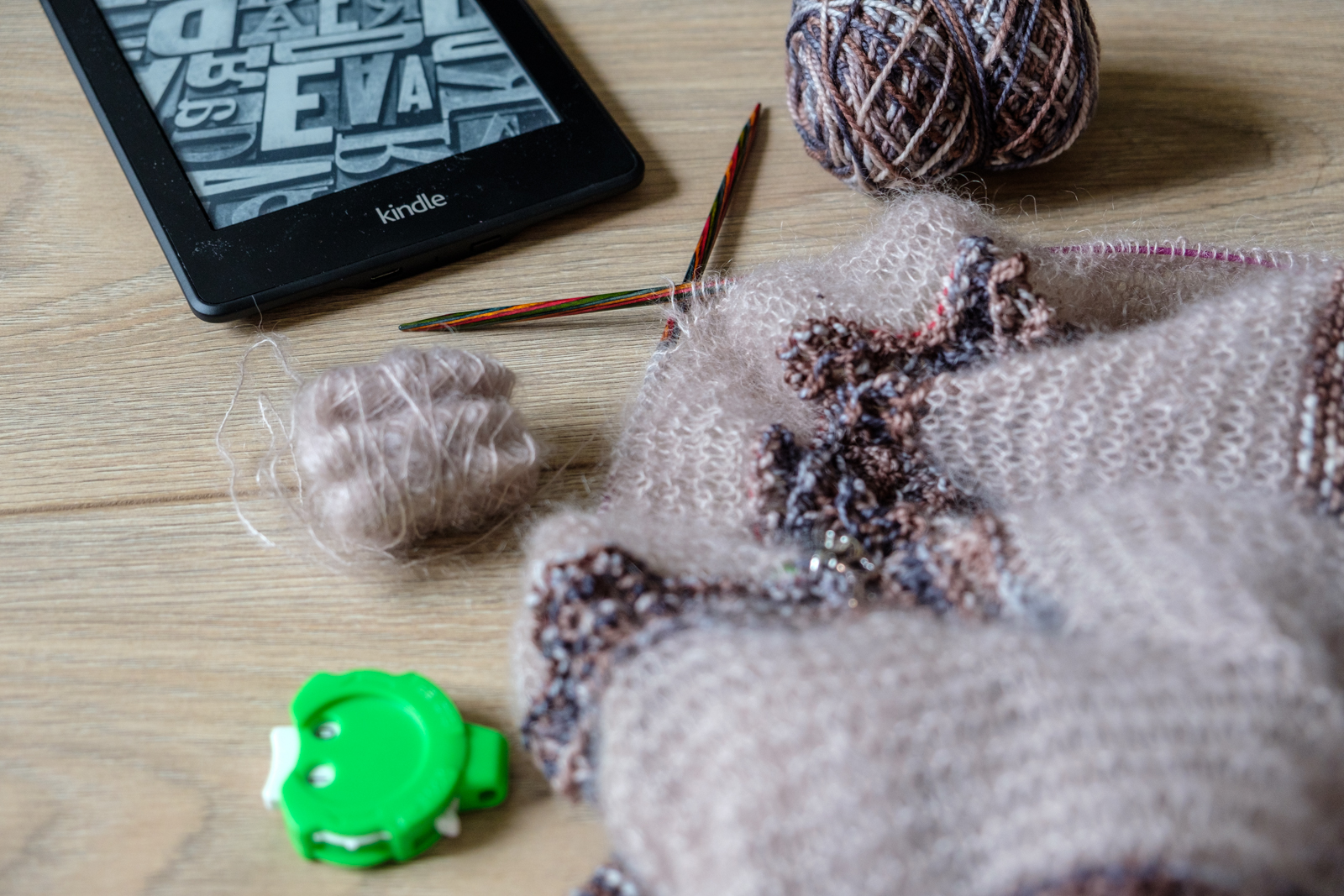 Several sections were knitted and I even managed another lace section without any problems! Yay! I have reached the part now where the total stitch count does not increase any more. And it is getting so beautiful, just try to picture it after blocking… 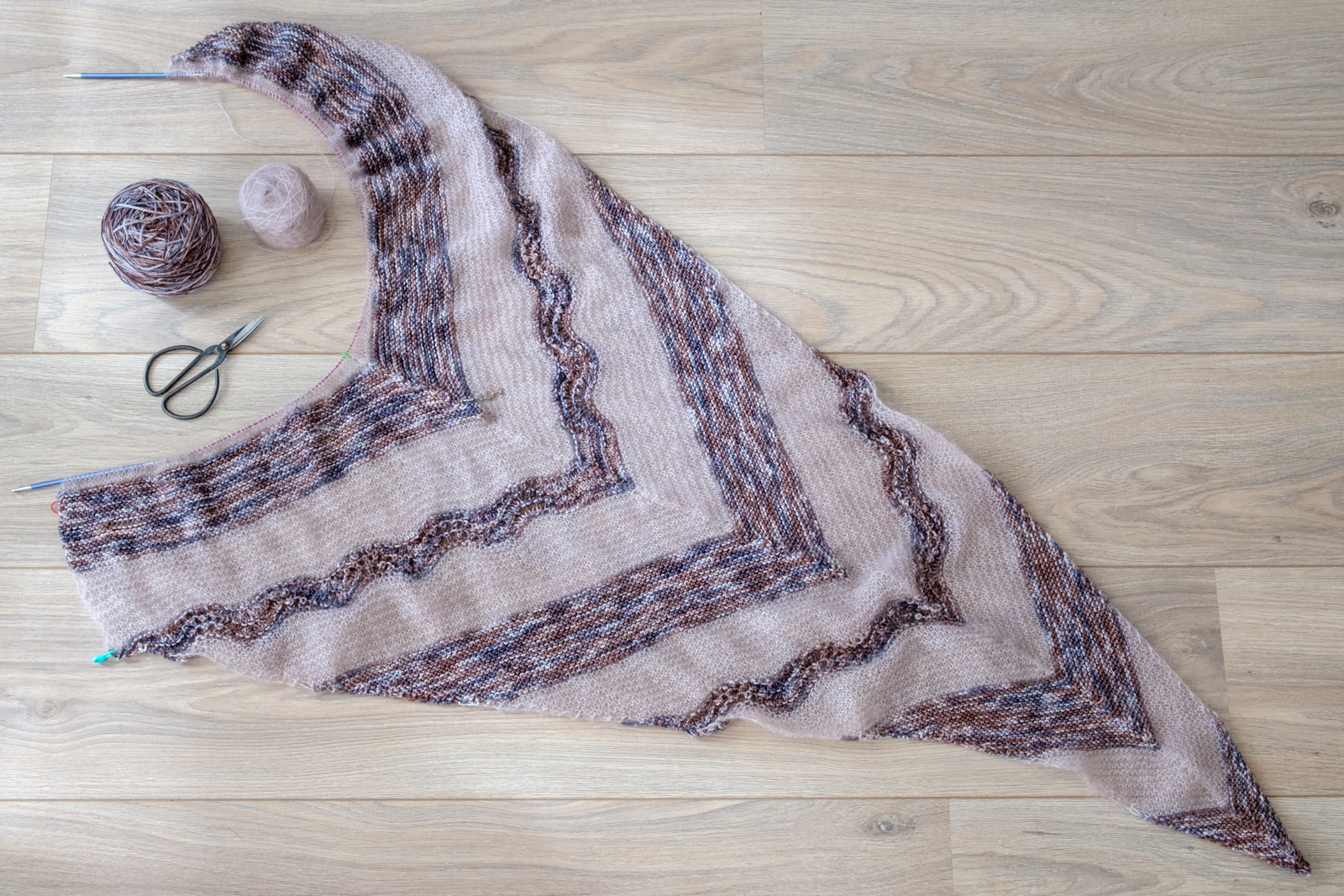 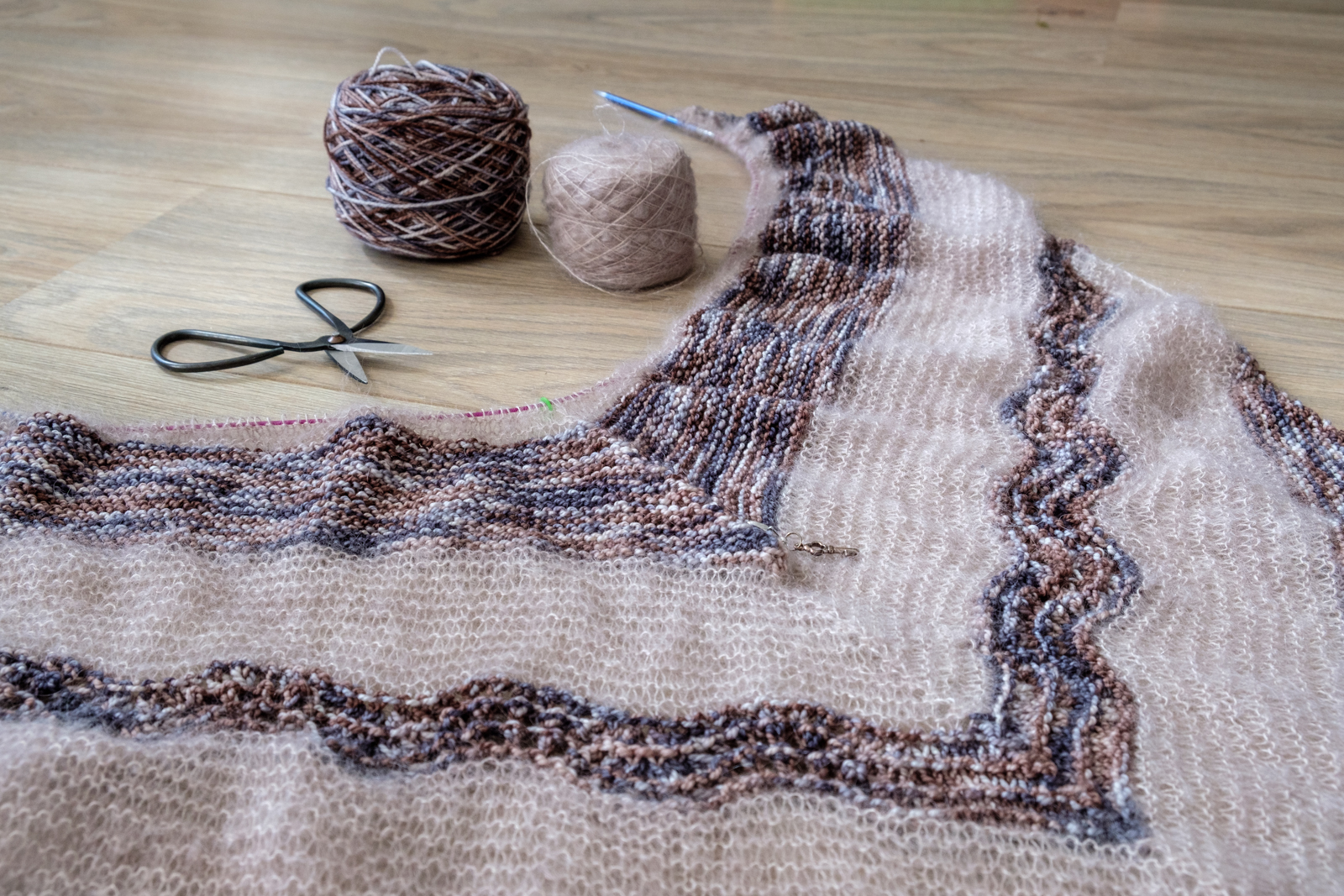 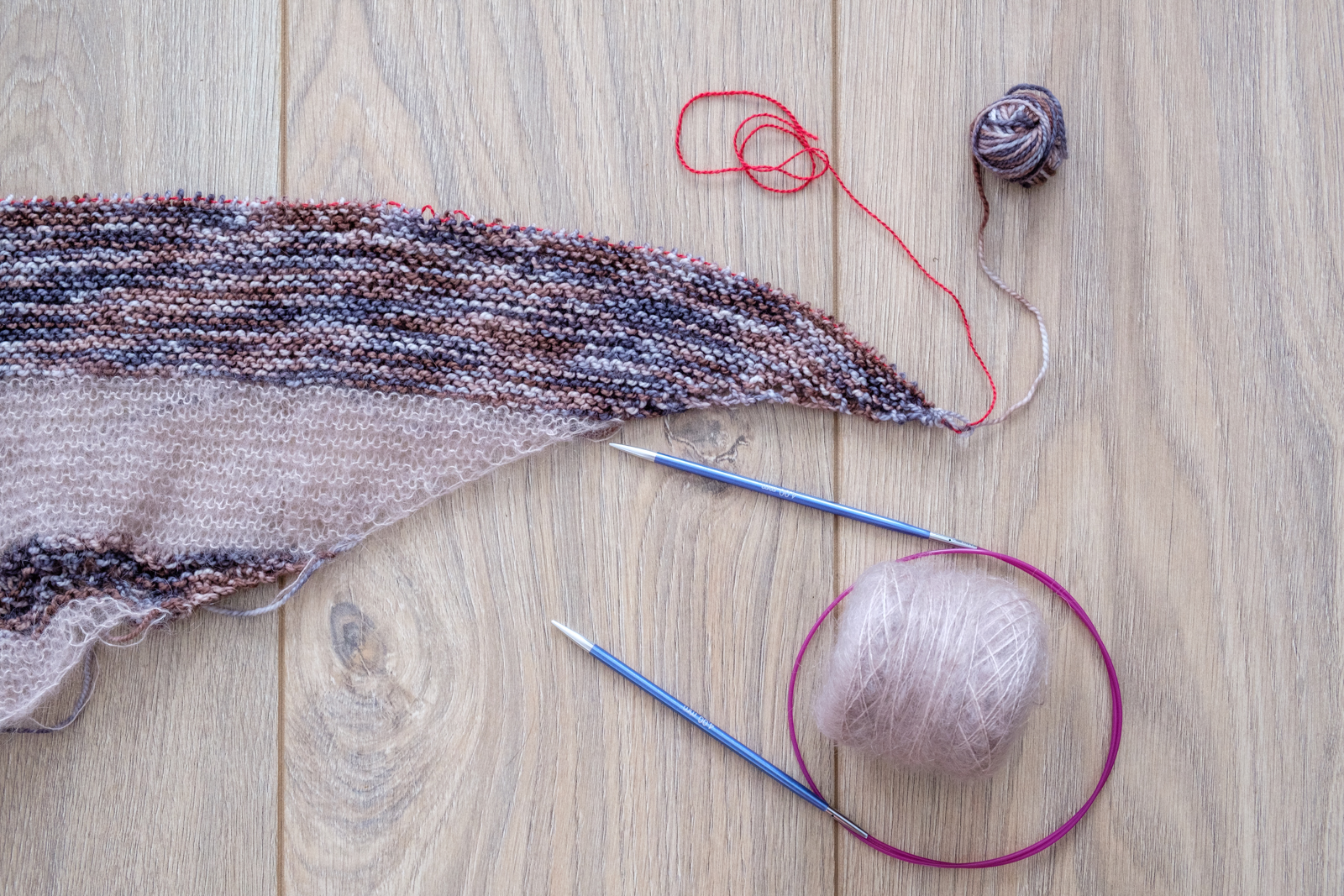 Luckily, I have learned my lessons (at least here) and I had just put in a lifeline. The mohair was kind to me and I was able to unravel the mohair section until I reached the lifeline. So I will be picking it up from there. You can imagine that it puts this relationship under pressure again…

Let’s cross fingers that our relationship improves and that another (and final?) breakup is not going to happen!

Does this sound familiar? Do you have unfinished (or finished) projects that you struggled with? 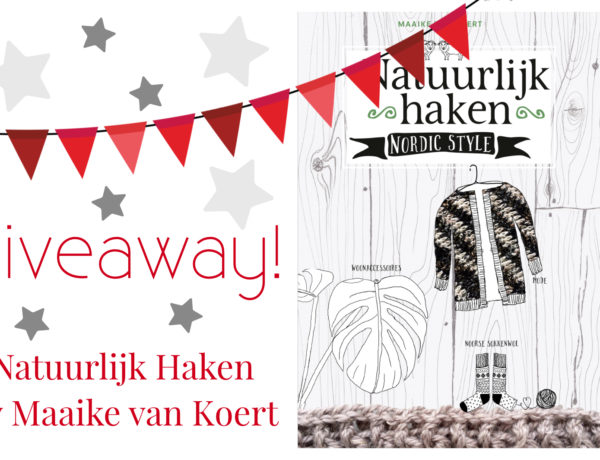 A Book for Me and a Book for You (giveaway) 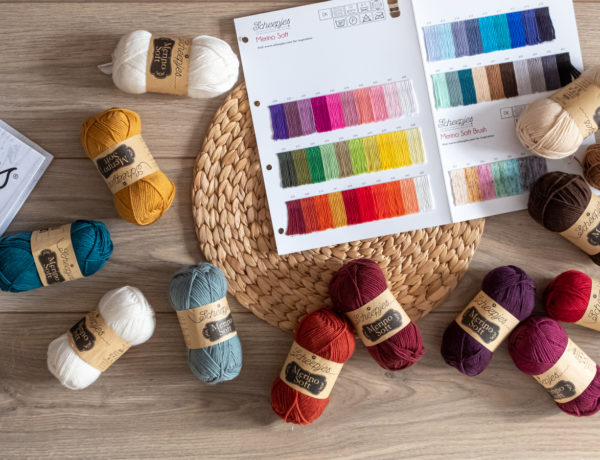 Shawl for Adventures in 7 Different Ways 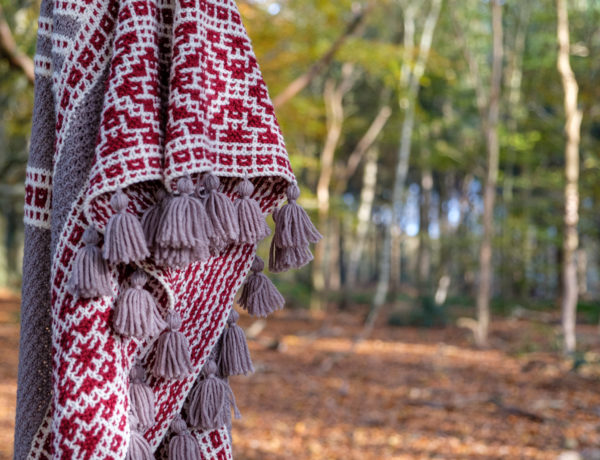